Pastor Paul Clee represented the world wide Adventist Church in the celebration and in his sermon emphasised what Apostle Paul has said in Philippians 3:12-14:

“I press on to take hold of that for which Christ Jesus took hold of me. Brothers, I do not consider myself yet to have taken hold of it. But one thing I do: Forgetting what is behind and straining toward what is ahead, I press on toward the goal to win the prize for which God has called me heavenward in Christ Jesus.”

Clee emphasised necessity to look forward, to the goal of our lives. “If we follow the advice of Apostle Paul, then Christianity won’t die, our churches will grow and prosper in the community until the Jesus will come,” said pastor Paul Clee.

People were happy and felt moved by the Holy Spirit when they were listening to the history of Seventh-day Adventist church in Lithuania in the past 80 years presented by pastor and former Mission Field president Danielius Ozelis.

Missionary work in Lithuania began in 1900. The first group of church members were established before 1919.
In 1920 the Lithuanian Mission Field (LMF) was organised.
In June 10, 1927 LMF was registered by the Lithuanian government.
Until the World War II there were 500 Adventist church members and 17 pastors in Lithuania.
During the war many church documents were lost. After the WWII came 50 years of occupation by the Soviet Union and under atheistic Communist regime LMF work was very limited. Almost in underground conditions only two congregations were left – in Siauliai and in Kaunas. Separate groups and members were meeting in different places of Lithuania. Adventist and other churches were persecuted and missionary work was pushed underground.
When the independence was regained, the church could freely continue its active work.
In 1992 the first evangelistic meeting was held in Vilnius.
In 1994 September 9 was a meeting during which was decided to ask Lithuanian government to register the LMF. In 1996 June 28 Lithuanian government recreated the registration.
In 1994 in Lithuanian Mission Field worked 5 pastors; Danielius Ozelis – president, Bertold Hibner – secretary.
1996 there worked 14 pastors.
Now in the Lithuanian mission field work 28 pastors.
In the 1992 Adventist church in Lithuania was one of eight Lithuanian Bible Society establishers and it’s participating actively in its work.
In the second part of the anniversary event was concert. It was well organised and showed beautiful diversity of praise in music, poetry and songs.

We have a nice group of pastors who are really doing an excellent job in their local places. I feel that our ministers and our members went home with the stronger commitment to serve our God,” at the conclusion said Bertold Hibner, president of the Lithuanian Mission Field.

Baltic Union Conference president Valdis Zilgalvis shared his enthusiasm: “It was very remarkable and wonderful experience of church family to be together in 80 years anniversary of Lithuania. I think the last period after 1992 – 2007 was very interesting. The main vision in order to reach goal – to develop church in Lithuania were to develop own leadership and develop educated pastors. The administration of Baltic Union and Daniel Ozhelis, Bertold Hibner worked together in order to organise Evangelistic campaigns, seminars. The big investment was given from Trans-European Division as well. We received Global Mission founds and 13th Sabbath offerings for buildings and evangelistic campaigns. The Newbold college developed special pastoral education programs for academic class students and for non academic class students. There was made special seminars by Union Department leaders as well. The Baltic Union staff gave special greetings and wishes for the future to keep Adventist message alive in Lithuania.” 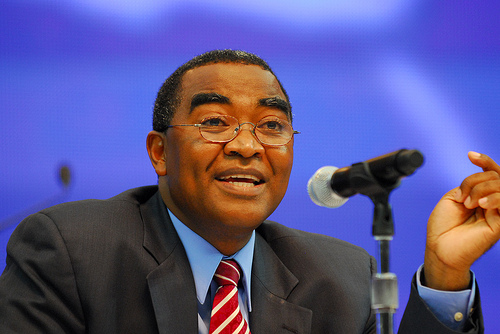